Nanny Cabbage,
Running through the new
Streets of Sydney,
In her black skirt
And a red jacket.

Running from strangers
Reaching and grabbing.
Running through back streets,
To the edge of Town
She calls Tobegully,
Where two white men
Catch you, grab you,
Kill you on that fateful night. 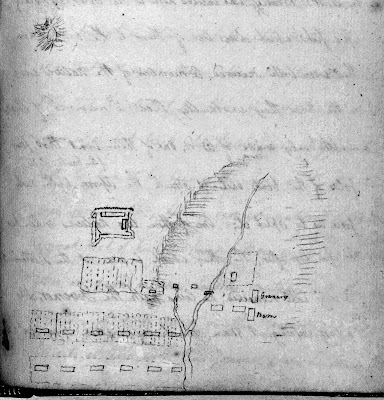 In the pages of his journal, Captain Philip Gidley King sketched the early location of Parramatta, established since November 1788. The digital address for this page is a1519174h.jpg and the page is identified as a1519174 in the State Library of NSW digital order system.

Having served as commander on Norfolk Island the past three years, Captain King is on the way to England carrying dispatches in April 1790.  Henry Dodd is in charge of the farm at the bottom right of the sketch. In the painting below, Mr. Dodd's house is the nearest to the viewer, on the right of the pathway with the south-facing chimney, two windows and a door, and is known to have had two rooms. 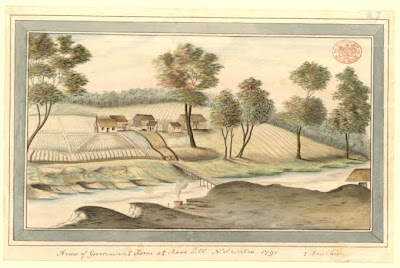 The smoke in the foreground is from a brick-making kiln, and the bridge to Dodd's farm is seen in the mid-distance. It's a good crop, apparently, the serried rows of the grain crossing the cleared farm area. 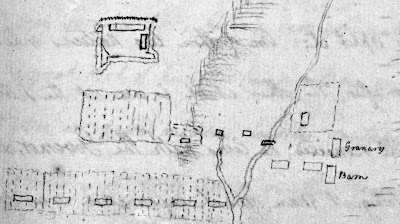 In this enlarged view of Captain King's sketch the Redoubt for the Marines' battery and encampment is top left. Across the bridge from Dodd's farm is "the Crescent", the steep rise of the banks of the river that creates a distinct area still recognisable today; an extensive crop of grain - maize - can be seen growing across the flats below today's Old Government House. Below the flats are the convicts' huts, five in this part of the sketch and another five below those, each hut houses ten convict men, and someone to mind the hut and keep house; gardens surround the huts. In this painting, one can glimpse the huts' outlines between the trees in the distance. 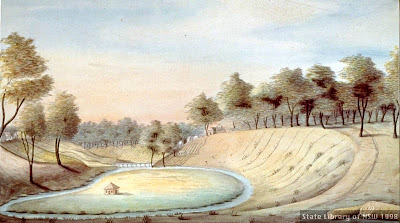 King writes of Parramatta, or Rose Hill, the site of his visit, "This settlement is on an elevated ground, which joins to a fine crescent, as regular as if formed by art; it is probable that this crescent, and the regular slopes which surround the settlement, have been formed by very heavy rains. The soil is loam, sand, and clay: the trees are not so large here as lower down the harbour, but the large roots lying on the ground render it difficult to clear. A fine stream of fresh water runs into the head of the harbour, which, in the winter, and when heavy rains fall, sometimes rises seven or eight feet, and becomes a rapid torrent. A redoubt is constructed here, in which are very good barracks for officers and soldiers: there is likewise a store-house.

On the opposite side of the brook, there is a farm-house, where a servant of Governor Phillip's resides, who is charged with the superintendence of the convicts and the cultivation of the ground; to which charge he is very equal, and is of the greatest service to the governor, as he has no other free person whatever to overlook any piece of work carrying on by the convicts. Near to this farm-house, there is a very good barn and a granary. The convicts houses form a line at some distance, in front of the barracks, with very good gardens before and behind each house: indeed, the whole, joined to the pleasantness of the situation, makes it a beautiful landscape."

Earlier in the diary